Rendering Joy: the most difficult and most under-appreciated craft

The Art of Joy

The thought has often occurred to me that there is an imbalance in the way we value artistic quality, when it comes to rendering negative versus positive emotions. The expression through art of negative emotions is very often seen by critics and the public as particularly laudable. Poignant, gripping, gut-wrenching. One only needs to look at the cinematic offerings that plague the screens of Arthouse movie theatres the world over. Most are dreary, depressing affairs, detailing sordid experiences which culminate in unimaginable tragedy. And we, the middle class connoisseurs, gush appreciation as we discuss the deeper meaning behind this vitriol, in between snatches from the circulating plate of canapés and sips from our glasses of Pinot Grigio. 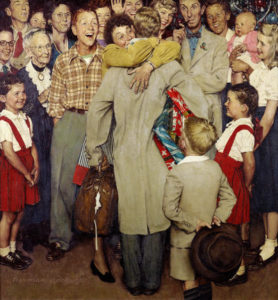 A masterful composition – Normal Rockwell’s “Christmas Homecoming” captures a moment of pure joy in a way few, more ‘serious’ artists, ever could.

In reality of course, the portrayal of misery on screen or through other artistic media is not particularly challenging, at least to the extent that it provokes some sort of strong emotional reaction in the viewer. That is because our brains are hard-wired to react to negative images, which in an evolutionary sense might signal threats to our safety or well-being. We quite literally respond more quickly to negativity. As a result, fear and distaste are perhaps the easiest emotions for an artist to excite in his audience (with the possible exception of the titillation provoked by pornography). Consider the multitude of poor quality horror films out there. Even mediocre acting, direction and cinematography are no deterrent to the achievement of their intended effect – to make us recoil from the abhorrent.

What is much more difficult to convey artistically – and hence what I consider to be a higher form of art – is the opposite: Moments of pure, unadulterated joy or quiet contentment. In art as in real life, joy is something elusive. It is fleeting and often only retrospective. Do you for instance remember that summer’s day, when you were perhaps seven or eight, and you played badminton in the park with your cousins? Late in the afternoon, someone produced a five pound note which some auntie or other had bestowed for the general good of the group, and you all ran, barefoot, towards the jingle of the ice cream truck that pulled up at the gate to the park? The sun was low in the sky when finally you all crossed the bridge of stones that led back to your uncle’s house, where the smell of fish and chips awakened in you an appetite you had been too busy to realise you had? Of course you remember that day. It was perhaps the happiest of your life. But the very fact of this happy day is only something you have registered in retrospect, which itself evokes a certain melancholy…If you were to describe that day in art – a sequence of images perhaps – how hard would it be to convey that youthful, carefree spirit, without seeming banal or clichéd!

For contentment, the case is even more difficult. To be content is to be free of negative experience or feeling, and an absence is a thing very hard for an artist to capture and convey.

This thought is not new to me, and I daresay it’s been pondered by many’s an artist or writer before me. But it returned to me in full force the other day, as I chanced to visit, in the company of my brother, a museum dedicated to the works of the iconic 20th Century American artist Norman Rockwell, whose work my snobbery had previously always dismissed as “mere illustration”.

How wrong I was to do so. Rockwell, more than any artist I know, captures the elusive quality of joy in many of his paintings in ways ‘greater’ artists would surely struggle to emulate. The happiness in his work is inescapable, and doubtless contributed in no small measure to the mythos of the golden age that was 1950s America. One such scene is “The Runaway”, in which a friendly Massachusetts State Trooper converses earnestly with a little boy who has run away from home and made it as far as the high counter stool of the local diner. As the two speak, the grubby waiter behind the counter listens in and can barely contain his mirth. We imagine their conversation: perhaps the boy is explaining to the policeman his plans to join the circus and become a famous trapeze artist. We know the trooper will be taking note of the encounter in the little black book we see tucked into his rear pocket. He will be sure to check in with the boy’s parents that evening, just to make certain the truant has returned home safely before it gets dark. The image is basked in an air of familiarity, comfort and benevolence that makes the soul sing.

As my brother and I paced the halls of the museum, we briefly debated whether or not the happy sentiment Rockwell was leaving us with could be considered artistically valid. After all, so much of what is styled serious art is bent on reminding us that the human soul is a tortured thing; that doom is our natural condition. Yet why is joy not as valid an emotion as suffering?

In my opinion, joy is just as valid as its negative counterpart. Let Rockwell’s paintings be an inspiration to us all. Fellow artists: Let’s try to paint, compose or write some happiness. Make your audience feel your joy.