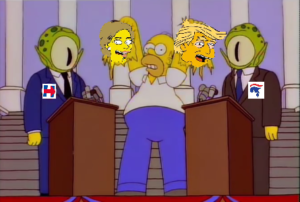 Despite my better judgement, I have recently found myself getting into social media exchanges with supporters of Hillary Clinton’s presidential bid. These exchanges are often acrimonious and always pointless, because no one ever manages to convince anyone else of their point of view on social media. However, the arguments propounded provide some interesting insights into where this campaign has taken us.

When I express my preference for a third party candidate, Hillary supporters usually begin – not by extolling their candidate’s merits (even they realise this is a claim too far) – but by using the now familiar argument that a vote for Jill Stein or Gary Johnson is a de facto vote for Donald Trump. This argument is of course nothing new. Years ago it was derided in a Simpsons episode in which Bob Dole and Bill Clinton are revealed by Homer to be nothing more than the hideous space aliens Kang and Kodos, bent on enslaving humanity. When a member of the crowd then threatens to vote for a third party candidate, the aliens mock him. “Go ahead, throw your vote away.”

Back to the Social Media exchanges: I usually respond to the Kang and Kodos argument by explaining that although I think Trump is a thoroughly repugnant individual and an awful candidate, at least he won his party’s nomination through a fair and open process, and he did so against the wishes of the party elites. The same, I point out, cannot be said for Clinton; certainly not after the latest Wikileaks revelations. I then note that I believe the price America would pay (i.e. a Trump presidency) in order to punish the DNC for rigging the nomination would possibly be worth it, if the sting to the DNC was so great that it delivered real electoral reform for the next primary process. After all, what is at stake is something greater than 4 years of stupidity. It is the essence of democracy in the United States.

What follows from Hillary supporters is a strange defence of the democratic nomination process being rigged. They often say something like, “Well, the process isn’t intended to be fair.” or “Parties can do what they like. They don’t even have to involve the electorate if they don’t want.” or else even “There’s nothing in the Constitution about how the DNC must organise its nomination process.”

This is of course perfectly true. Except when you combine the two arguments, “the DNC can rig all it likes and choose whomever it pleases” + “a vote which is not for the DNC’s chosen elitist is a vote for the other monster on the podium!” you essentially have an admission that the choice of president is in no way democratic. If the party nomination processes offer no real choice, then the two-party general election certainly doesn’t either.

So if the Constitution does not provide guidance on the fair administration of primary contests, perhaps it is time for Constitutional reform. After all, the current system is so badly broken that even the most ardent supporters of the candidate whom bookies say is going to win in November (let’s call her “Kodos”) can only invoke the Kang and Kodos defence to convince us to vote for her.

In the meantime, I will be using my vote in November to punish Debbie Wasserman Schulz and the DNC for what they have done to Bernie Sanders’ Political Revolution. I will be voting for Jill Stein, and I’ll be encouraging red state voters to choose Gary Johnson.